These Three Moves Can Drive You Broke Fast 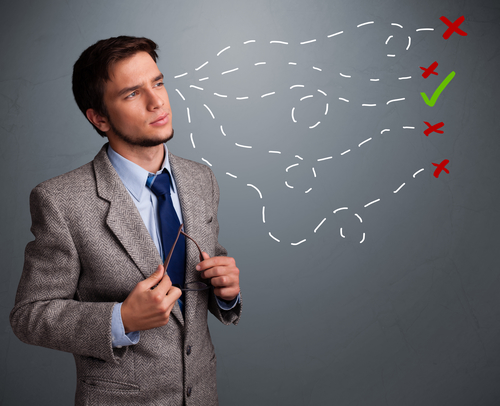 Last weekend, my wife and I got VIP invitations to come to Orlando and see Comedian of the Year Sebastian Maniscalco of Showtime's hit stand-up special, "Why Would You Do That?" I think he's arguably the best in the business right now, and we loved the show, but I'm not here to write a comedy review - I'm here to show you how to make and keep money in the stock market.

But the thing is, Maniscalco's sharp routine relates directly to what I'm going to show you today, because there are some really bad choices investors make that would leave anyone asking, "Why would you do that?"

Why Would You... Trade Without a Plan?

Too many people jump into the stock market as a way to "get rich quick." Now, I'm all for getting rich quickly, but you just can't do it without some sort of plan. And the best one to use - my personal favorite, in fact - is rules-based trading.

This is basically planning your trade and trading your plan, no matter what the headlines are saying or the markets are doing. You've got a clear set of rules. You're not trading on emotion (which is the fastest way to lose all of your money), and you're not just guessing and hoping for your trades to work out. That method isn't something you can quantify or back test - it's really not a method at all.

Why Would You... Buy and Sell Stocks as a Short-Term Profit Strategy?

Now don't get me wrong, I love investing in and buying stocks - as a long-term strategy. Buying and holding stock for the long term means you're willing to sit through the bullish and bearish cycles for those big returns down the line. It also means you're primarily focused on a company's revenue and earnings (fundamental analysis) instead of patterns and market data such as price and volume (technical analysis). Earnings and revenue can be tricky, though, to put it mildly, and can take years to work out for your portfolio.

Take Amazon.com Inc. (Nasdaq: AMZN)... Anyone who bought the stock during its initial public offering (IPO) has turned a $1,000 investment into a $638,000 today - 20 years later. Remember, though, the stock also dropped nearly 90% in 2000, which caused a lot of investors to sell their shares. But there's a much, much better, more profitable way... options trading.

With options, you basically "rent stocks" for much less than you would to buy them outright. And instead of paying up to thousands of dollars for a single share, you get to control 100 shares at a time for much less. Options also reduce your risk, giving you leverage in the markets, and deliver profits much, much faster. You're talking about days, weeks, or months to make money - not two decades. Furthermore, it doesn't matter if the markets make record highs, record lows, or don't move at all... there's a safe and easy way to profit no matter what.

So why would you ever waste thousands of dollars buying single shares of stock to hold in the short term (with little chance of recouping that money)... when you can double or triple your money for a quarter of what you'd pay to buy the stock outright?

Why Would You... Bet the Farm on "That One Chance?"

You can think of these "all-or-none" investors like the folks who spend all day and night in casinos. They start out with the smaller bets at first, but then believe they've found the secret and push in all their chips for that one big win. But 10 seconds later, they're skulking away from the table with their tails between their legs because they just lost everything they had.

Investors do this, too. A lot. And it's a tragedy.

They suffer a few small losses and then feel as though the markets "owe them" for those losses. So they put all of their money on that one trade they think will give it all back to them. This is called trading on emotion and without a plan (which we talked about earlier). And unless it's your lucky day, you're looking at losing all of your money - on one single trade.

Remember the guy in the wolf mask who was convinced Apple Inc. (Nasdaq: AAPL) would fall after earnings, bet his last $249,000 shorting Apple, and lost it all?

Why would you do that? It's not about today, it's not about tomorrow, or next week, or next month. It's about building long-term wealth, without emotion. So don't bet the farm on one trade. Ever. Use rules like the ones we follow in Weekly Cash Clock instead.

It's your money and you work hard for it. It's precious. Manage and steward your capital like your life depended on it. Take measured positions according to your trading plan, and consider risking no more than between 2% and 5% of your account per trade.

Speaking of managing risk and exploiting opportunities, many of those little "penny stocks" that get little or no coverage, are appreciating in value by 500% or more by millionaires who regularly drive them up. Get the full report here.