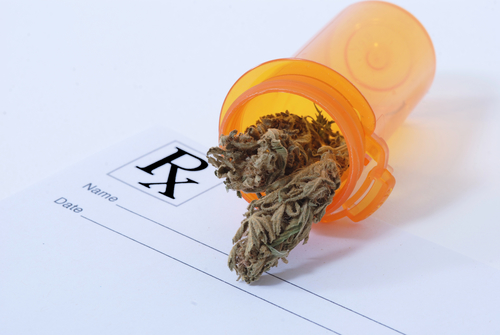 Currently, 29 states and the District of Columbia have some form of medicinal marijuana legalization. And as more states legalize cannabis for medicinal purposes, we want to make sure Money Morning readers know about the top medical marijuana stocks to watch.

Even traditionally conservative states are starting to realize the benefits of medical marijuana. For example, West Virginia Gov. Jim Justice just signed a medicinal marijuana bill into law on April 19, 2017.

Marijuana prohibition has hindered research for cannabis drugs in the past, but more states legalizing medical cannabis is creating a viable market. By finding the right medical marijuana companies who have breakthrough drugs in the pipeline, investors can profit if these drugs are approved.

With the trend towards even more states legalizing medicinal marijuana, we're giving out three pot stocks to watch today...

One product in its pipeline right now, Anabasum, is a novel synthetic oral endocannabinoid-mimetic drug designed to resolve chronic inflammation and fibrotic processes.

If Anabasum is approved, it could become the go-to treatment for patients suffering with cystic fibrosis because current treatments have harmful side effects.

According to Corbus' website, systemic steroids and high doses of ibuprofen are effective at improving the symptoms of the disease. But the side effects associated with these treatments can range from dizziness to liver problems.

And because there are only a few drugs to counter certain conditions of cystic fibrosis, patients either have to deal with side effects or forgo treatment.

The End of a Prohibition
Learn How Average Americans are Becoming Marijuana Millionaires!
Get the Full Report Here!

But Anabasum could provide a safe, effective chronic anti-inflammatory therapy for patients suffering from cystic fibrosis.

There could be even bigger long-term gains if trials show Anabasum is an effective treatment for patients with sclerosis and cystic fibrosis in clinical trials. And with over 30,000 people in the United States alone having cystic fibrosis, the market could be huge.

While investors wait to see if Anabasum passes trials, we had to make sure Money Morning readers were aware of the next two profit opportunities.

And one medical marijuana stock we're watching could climb nearly 100% in the next 12 months...

GW Pharmaceuticals Plc. (Nasdaq ADR: GWPH) is one of the top medical marijuana stocks to watch in 2017.

GWPH's top drug is Sativex, the world's first plant-derived cannabinoid prescription drug. It's approved in 29 countries outside of the U.S. to treat spasticity caused by multiple sclerosis.

GWPH's also has a pot-based epilepsy drug named Epidiolex. In April 2016, the FDA granted Epidiolex orphan status to treat tuberous sclerosis complex. This is a genetic disorder causing epilepsy in more than 80% of people who suffer from the disease.

The FDA grants "orphan" status to drugs that treat rare diseases. The manufacturers get favorable tax treatment as well. GPWH has exclusive rights to sell the drug for seven years in the United States.

And as more states legalize medical marijuana, GWPH could see its market grow.

Those gains are impressive, but this next medical marijuana stock could climb almost 100% in the next 12 months...

One of its most impressive products is CR845, a drug designed to limit the entry of uremic pruritus into the central nervous system....

Uremic pruritus can cause sleep loss and depression. It is also reportedly associated with chronic kidney failure. It is known to affect 20% to 50% of patients with renal failure.

There are no approved ways to battle uremic pruritus in the United States right now. But in its phase 2 trial, CR845 had positive results.

Compared to a placebo, dialysis patients using CR845 had a 54% greater reduction in their worst itch sores.

But if you missed out on these massive gains, it's okay. Investment bank and brokerage firm Laidlaw & Company has a one-year price target of $35 for the CARA stock price. From today's opening price of $18.17, that's a potential profit of 92.62% in the next 12 months.

Turn a Small Stake into a Fortune: A new earth-shattering government announcement could completely change the legalization of marijuana - forever. In fact, thanks to this historic legislation, tiny pot stocks trading for under $5 are getting set to double, triple, or quadruple. In an exclusive interview with Money Morning, pot stock expert Michael Robinson shares all the good news - including details on five tiny weed stocks that could potentially turn a small stake into $100,000. Click here to continue.